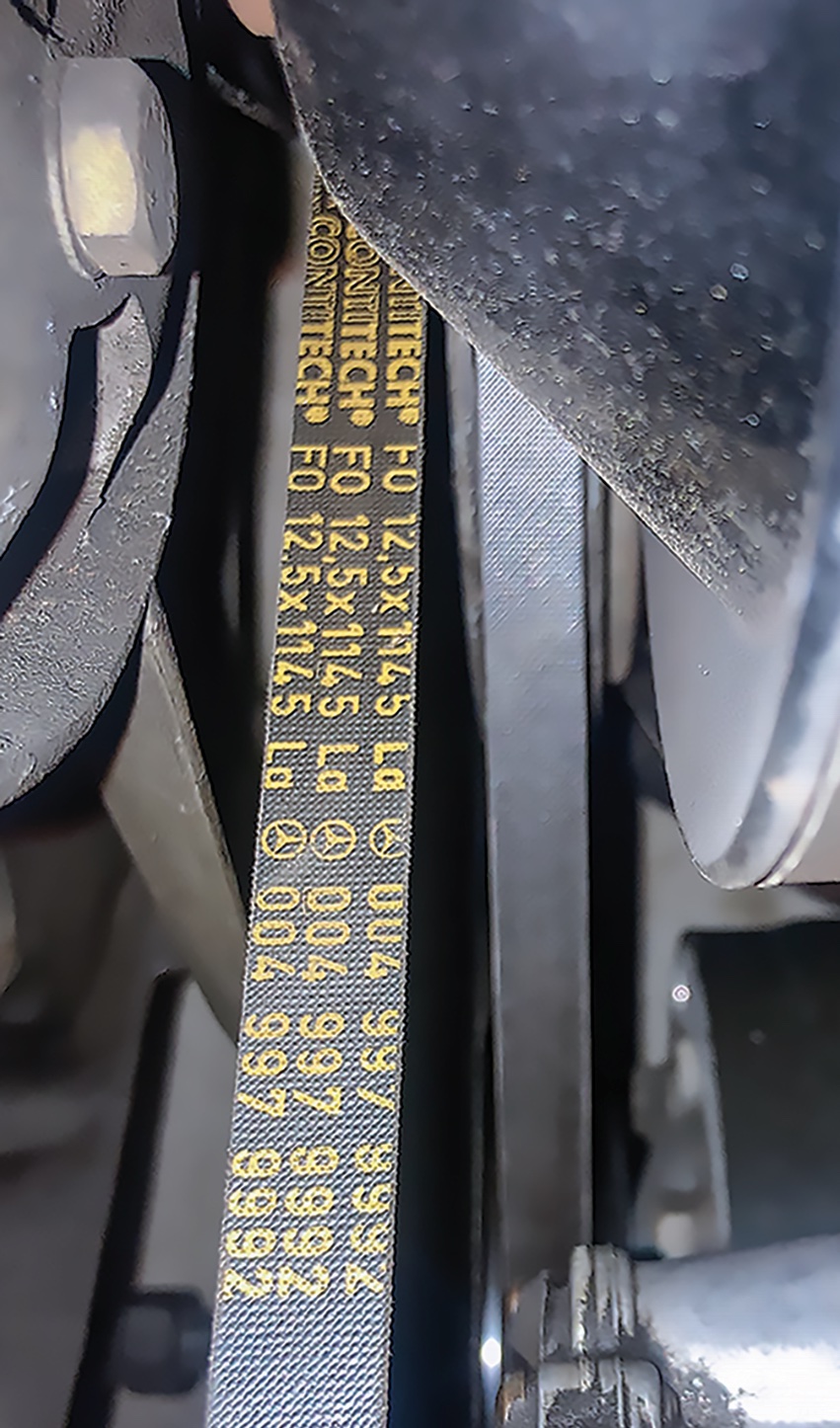 Mercedes-Benz cars are not known for throwing off their V-belts. At least, that was true back when Mercedes-Benz used V-belts. However, as belts age, they become susceptible to jumping and even snapping. My theory used to be that all European-made V-belts are okay, and that seems to have been true for a long time.

All the way through the 1990s, companies like Optibelt, Rolunds, Semperit, Flennor and Continental (Conti-tech) supplied high-quality belts for Mercedes. One by one, these brands have disappeared. Optibelt still makes belts for Mercedes. So does Continental, but their non-Mercedes V-belts now say "engineered in Germany, made in China."

Other than their branding as genuine Mercedes-Benz parts, Mercedes V-belts are uniquely designed to fit the pulley profile of the accessories they are driving. While most belts we buy today are internally ribbed, Mercedes did not necessarily think this was better. That's why the company supplies both internally ribbed belts and smooth belts. Different belts are designed for specific applications. For example, all the belts on the 1983 300D are smooth and are designed for that model. The belts on a 560SL are a hybrid belt system, where the water pump and emissions air pump are driven by smooth belts and the AC and alternator are driven by ribbed belts. With some accessories it doesn’t matter as much. Case in point, on a 1981 240D the same AC compressor is driven by a ribbed belt. One thing is evident: real Mercedes belts fit their accessory pulleys extremely well.

When to replace your belts

The first question is how to evaluate belts for replacement. Looking at the part of the belt that contacts the pulley, flex the belt and look for cracks. If cracks in the rubber appear, it is time to exchange the belt. If one belt is showing signs of cracking, it’s best to replace all of them. The procedure for most engine belt replacements is well-documented in the blue Mercedes-Benz service manuals, but if you want exact belt sizes, you must look in the technical data manual. Technical data books were diminutive supplements with everything from torque values to suspension heights, including belt sizes for every engine and accessories like air conditioning. These books are readily available on Ebay and updated versions were issued every two years.

What about “domestic” belts?

While I have spoken about some of the German brands, a more relevant question would be whether belts supplied by Gates, Goodyear, Dayco or other domestic manufacturers are available. This is a complicated question, as some Gates and Dayco belts are supplied by Mercedes as original equipment! However, these are also manufactured at factories in Europe.

In this case, let’s stick with auto parts store over-the-counter belts. The first obstacle seems to be belt size. Many of these V-belts are supplied in SAE sizes with the metric sizes being stamped in tiny print on the back of the cardboard belt holder or encrypted into the printed material on the belt.

True metric belts have their sizes stamped into them. For example, the AC belt for the 300D turbo will say “12.5x925” meaning it is 12.5mm wide and 925mm long. Aftermarket metric belts may say “13x925”, so the difference is insubstantial in width, but you can see how tight the tolerances are.

Cost is, surprisingly, the number one factor working against the domestic belts. The average high quality Gates belt costs about $25, where the average Mercedes belt or matched set of belts costs around $15–$18. Duralast belts from AutoZone are priced on par with the Chinese Conti-tech belts, but they are best for emergency use only.

While the expensive American belts are durable and long-lasting, they are not as quiet and don’t fit well, often being too long or too short, and requiring pushing the tensioners to their limits.

I do prefer a domestic belt in one scenario. On 1971 and earlier W113 models with AC, the Mercedes belts are not up to the task of driving the York compressor. On these models, I use NAPA heavy duty “green” belts, since they don’t stretch out like spaghetti.

Are Conti-tech belts any good?

The easy answer is “only if they are new-old-stock and stored correctly.” The beginning of the end for Conti belts began a few years ago when Conti switched the lettering on the belts from trademark yellow to white. At this point, the ribbing on the belts changed, the rubber became softer and more prone to premature stretching and cracking, and the belts started to wear out faster. At this time, they were still made in Germany, but a few years later, the infamous “engineered in Germany” statement began. The new Conti belts wear out quickly, and are made as thin and cheap as possible, so they require constant adjustment. The few dollars you save over genuine Mercedes belts are just not worth it. Some shops install these without knowing the difference. If your shop installed these and you were charged Mercedes-Benz list prices for parts, demand replacement with the genuine article.

Mercedes still supplies belts from Continental, but these are German-made for Mercedes-Benz only. A genuine Mercedes belt must have the star and a Mercedes part number on it.

Opposite, I have included the belts and part numbers for the 123 Turbodiesels and the M116/117 3.8/5.0/4.2/5.6 engines. My hope is after reading this article that you will install nothing but the finest Mercedes belts on your car.