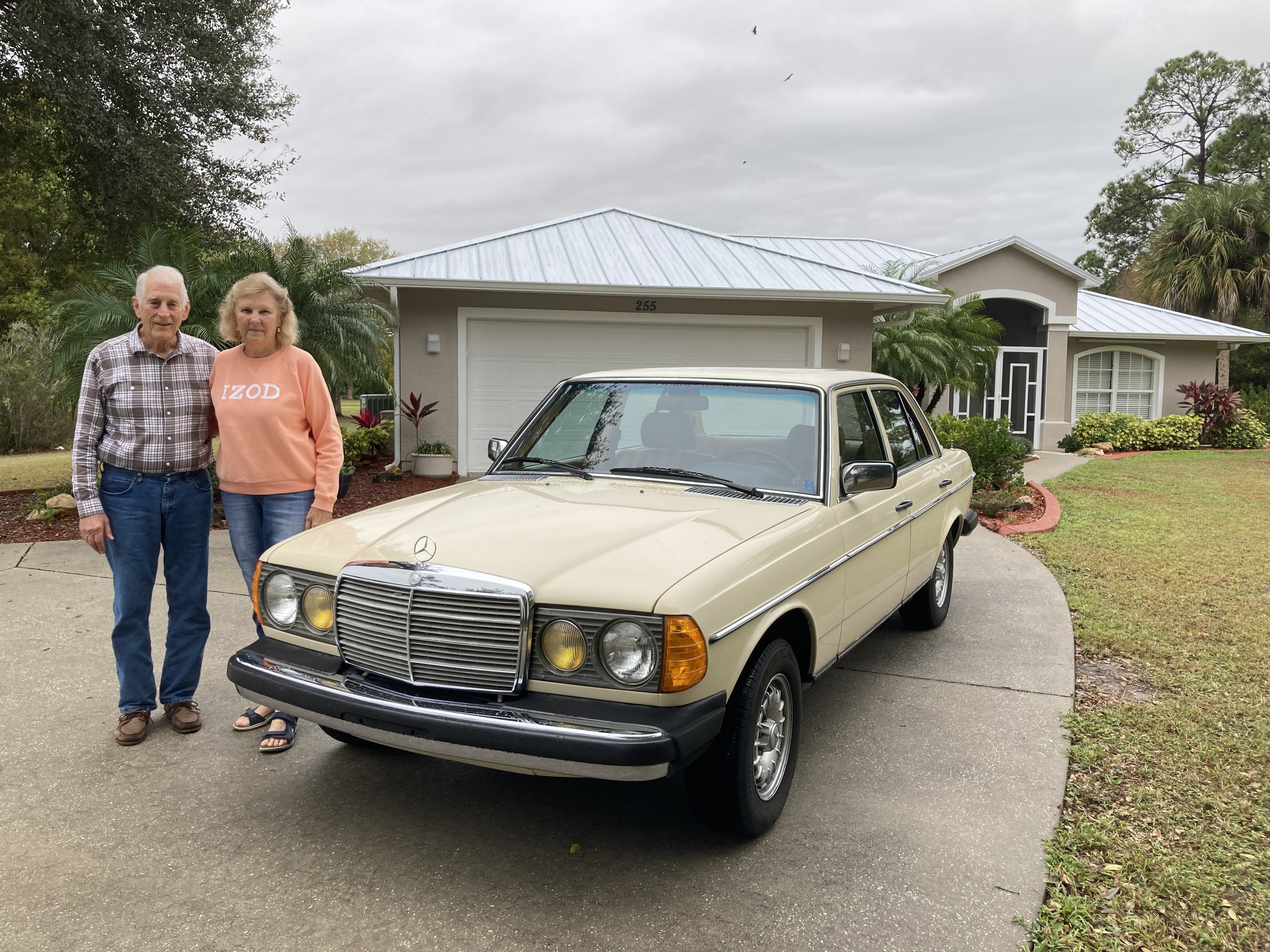 Ann Fagan has been an avid MBCA member and collector for over 40 years. Ann has mostly focused on various SL models from the 1950s to the 1990s, and she has also owned several W124 sedans.

A couple of years ago, Ann acquired a 1982 300D Turbo sedan with 70,000 miles. She was drawn in by its analog nature but also by the exemplary engineering that has kept so many of these vehicles on the road for more than four decades. The 300D has had several owners; not much is known about its history. Ann decided that she wanted to find an original, well-documented, one-owner example with low miles. In January 2022, I found a promising craigslist ad in Vero Beach, Florida for a 1982 300D Turbo Sedan that checked all these boxes. The seller, Lee Dee, was selling a 57,000-mile car his father had purchased new.

A pre-purchase inspection was performed before the sale was finalized. This is always a great idea, especially if you live far away and cannot test drive the vehicle. You will almost always find areas of concern that would otherwise go undetected. Not only do you know what you are getting into, but it can be an invaluable negotiating tool.

The car had only covered 15,000 miles in the last 15 years; it would need some maintenance to make it safe and reliable. Inspection revealed that the shifter bushings were worn, tires were 15 years old, drive belts were old, and the A/C compressor was leaking and not charged. All the fluids needed to be changed.

Once we knew the car was sound, Ann closed the deal. Lee and Lola agreed to store the car in their hangar until it could be picked up. Pierre Hedary agreed to take on this project at his shop in Titusville, Florida (1). I have known Pierre since StarTech 2013 in Alabama and was excited to finally work with him and learn some new skills and techniques. I booked a flight from New York to Orlando at the end of January to coordinate the next steps.

Five days to revive the car

The following five-day journal is not meant to be a complete do-it-yourself guide but rather an overview of typical issues that you can expect to face when purchasing a 40-year-old W123 diesel. The inspection report provided a good roadmap. As you will see, we ran into only one major surprise. As an added benefit, a few components were able to be repaired with a soldering iron.

Pierre was impressed when he first saw this original and unmolested 300D. It was certainly one of the best examples that had come in for servicing. Pierre decided we would tackle just a few jobs in the few hours remaining that first day. I changed the primary and secondary fuel filters. Pierre spotted an odd oil drain plug and swapped in a correct one, spilling only a few drops of oil in the process. Due to their age we decided to replace all four drive belts with genuine Mercedes-Benz belts, which are only marginally more expensive than aftermarket belts. We used genuine parts and filters whenever possible.

The gear selector felt sloppy, which made it difficult to put the transmission into the correct gear. This was because both lower gear shift bushings were missing. Also, the four bushings inside the gear shift housing were badly deteriorated or missing. We replaced all 6 bushings (2) and the gear selector felt nice and tight. This is a very common job for all models from this era.

We changed transmission and power steering fluids. The old fluid looked clean, a good sign that this car had not been neglected.

We then focused on the front steering components. We knew we would be changing the lower ball joints (4), and the upper control arms were questionable. Pierre inspected the control arms and decided they were worn out. After the wheel bearings, brake rotor, dust shield, and brake caliper were removed, we could access the lower ball joint. The idler arm bushings were also replaced. Then we finished up by replacing the upper control arms and sway bar bushings. During reassembly, the right outer wheel bearing was repacked with fresh grease. The left wheel bearing was replaced entirely.

Crewmember Wesley showed me how to change the rear differential oil, removing the top fill plug first to ensure that the oil can be replaced. Then the drain plug is removed to drain all the old oil. We used Valvoline 75W-90 gear oil.

Pierre noticed that the throttle shaft bushing in the firewall was cracking and replaced it (5). The bushing is white plastic that becomes brittle with age.

A valve adjustment should be performed every 15,000 miles. Because we did not know when the last adjustment was done, we did one. First, we disconnected the throttle linkages and removed the valve cover, then carefully cleaned the mating surface for the valve cover. This job was performed near the end of the day so that the engine would be cool to the touch.

In preparation for the air conditioning service the next day, Pierre investigated why the blower fan was not operating correctly. I had noticed that the fan worked intermittently in the defrost setting. To troubleshoot, Pierre removed the push-button control panel and found several broken solder joints. After resoldering the joints, the blower motor worked on every setting.

I had preordered five new Hankook Kinergy tires in the original size of 195/70-14. This tire size has been getting more difficult to find. The original and unused Continental spare with a 1982 date code still sits in the trunk. This was verified by looking at the data card in the maintenance book. Ann decided to preserve the spare for posterity, so we got her a used wheel as a spare. We had the five new tires mounted and balanced at a local tire shop.

Crewmember Jesse flushed the coolant system and refilledwith a 50/50 mixture of Zerex G-05. I used a pressure bleeder to bleed the brake fluid. The pads and rotors were in fine condition with little wear.

I removed the Hirschmann power antenna because the mast was stuck. After dissembling it, I found the plastic tail was broken. We tried installing a new mast, but it would not feed in correctly. We reinstalled the existing antenna, but the assembly will need to be sent to Becker Autosound in New Jersey for repair.

According to records, Joe Dee had the A/C compressor resealed about 20 years ago. The original AC Delco compressor was still in place. Pierre replaced it with a NOS Delphi (8) from stock along with a new receiver drier. We decided not to convert the system to R134a and instead charged it with Freon 12. The newly working blower motor was soon blowing ice cold air into the cabin.

Things don't always go smoothly. As I was returning from dinner after the third day of work, the car started to sputter and die. Fortunately, there was very little traffic. I managed to restart the engine a few times as I kept the car close to the shoulder. I also discovered the hazard switch was not working. Luckily for me the next exit was just ahead, and I managed to pull into a gas station. To my relief, they had diesel fuel. I added about five gallons and the engine roared back to normal. The fuel gauge indicated just under a half tank. Had I run out of fuel because of a faulty sending unit, or was there a clog in the fuel system? The next day at the shop, this issue became our top priority.

We pulled the fuel tank sending unit and found that the float was not sliding up and down freely. Once cleaned with brake cleaner, it was back to normal, but this wasn’t the main problem. Next, we drained the fuel tank (9). After the first five gallons the flow slowed to a trickle. Once the tank was empty, the strainer was removed and found to be heavily clogged (10). We cleaned the strainer with brake cleaner and a soft brush so that it could be reused. As for the fuel tank, I helped remove it so that we could power wash it. We found algae, gunk, and a bit of rust in the fuel at the bottom of the tank. We reinstalled the tank and sending unit along with new fuel filters. Pierre also replaced the short return and vent hoses and clamps. The car ran perfectly after that, right down to the reserve level.

My theory is that that below a certain fuel level, there wasn’t enough weight to push the fuel through the clogged filter. These cars rely on a gravity-fed system without a fuel pump. After adding five gallons, the fuel started to flow again. Once we drained the diesel from the tank, the fuel flow stopped rapidly, just like previously on the highway. Although surprising, this is not uncommon for a 40-year-old Mercedes-Benz diesel. Sometimes, the tank must be replaced or restored.

We spent the final day wrapping up a few outstanding issues. Pierre had a used hazard switch, which worked perfectly, but the triangle was mostly worn off the red toggle (11). I pried off the tops of both switches with a thin screwdriver and then swapped the toggles so the switch looks good (12) and works properly.

The front passenger window had not functioned correctly for at least 15 years. Pierre had me remove the door card and then tried to shock the motor with a 12-volt power source. This did nothing, so I removed the motor, and Pierre beat it on the bench. This got the motor to run intermittently. Pierre then took the cover off the motor and removed the top gear. While inspecting the brushes, he found a broken solder joint (13) on the brush holder. He re-soldered this joint, and the motor worked again!

The clock was not working. I pulled the instrument cluster and removed the tachometer and clock assembly. Pierre removed the two old capacitors and replaced them with new ones (100 uF, 16V electrolytic capacitors). The clock now keeps perfect time.

The tachometer was not working. The solder joints on the tach amp are prone to failure. At Pierre’s suggestion, I took a nickel that we found the day before in the trunk and put it under the tach amp cap. The tach started working immediately. This is not a long-term fix, but we could verify that the engine was turning about 3,000 rpms at 65-70 mph.

This 1982 300D is now performing as good as it looks. Pierre believes that this example is among the top 3 percent that he has seen. A big thank you to Pierre and his crew: Jesse Vongnaraj and Wesley Aponte-Gonzalez. In the course of our work, we repaired original parts whenever possible. Otherwise, we used authentic Mercedes-Benz parts to maintain the originality of the vehicle. Thankfully, Mercedes-Benz continues to supply many of these parts for a model that has been out of production for 37 years.

Once the car was sorted it was time to deliver it to Ann, on the west coast of Florida. As expected, the car performed flawlessly on this three-hour journey. Ann finally got her time behind the wheel as we headed two hours south to Naples (14). We went to the Cars on 5th Concours. Ann then cruised around the west coast of Florida on a business trip in her “new” W123.

Now that the trip is in this W123’s rearview mirror, the former Lee Dee/Joe Dee 300D will become part of Ann’s collection in New York where it will be used for weekend drives, road rallies, and local car shows. With proper maintenance, storage, and regular exercise, this time capsule 300D should still be on the road for the next 40 years. 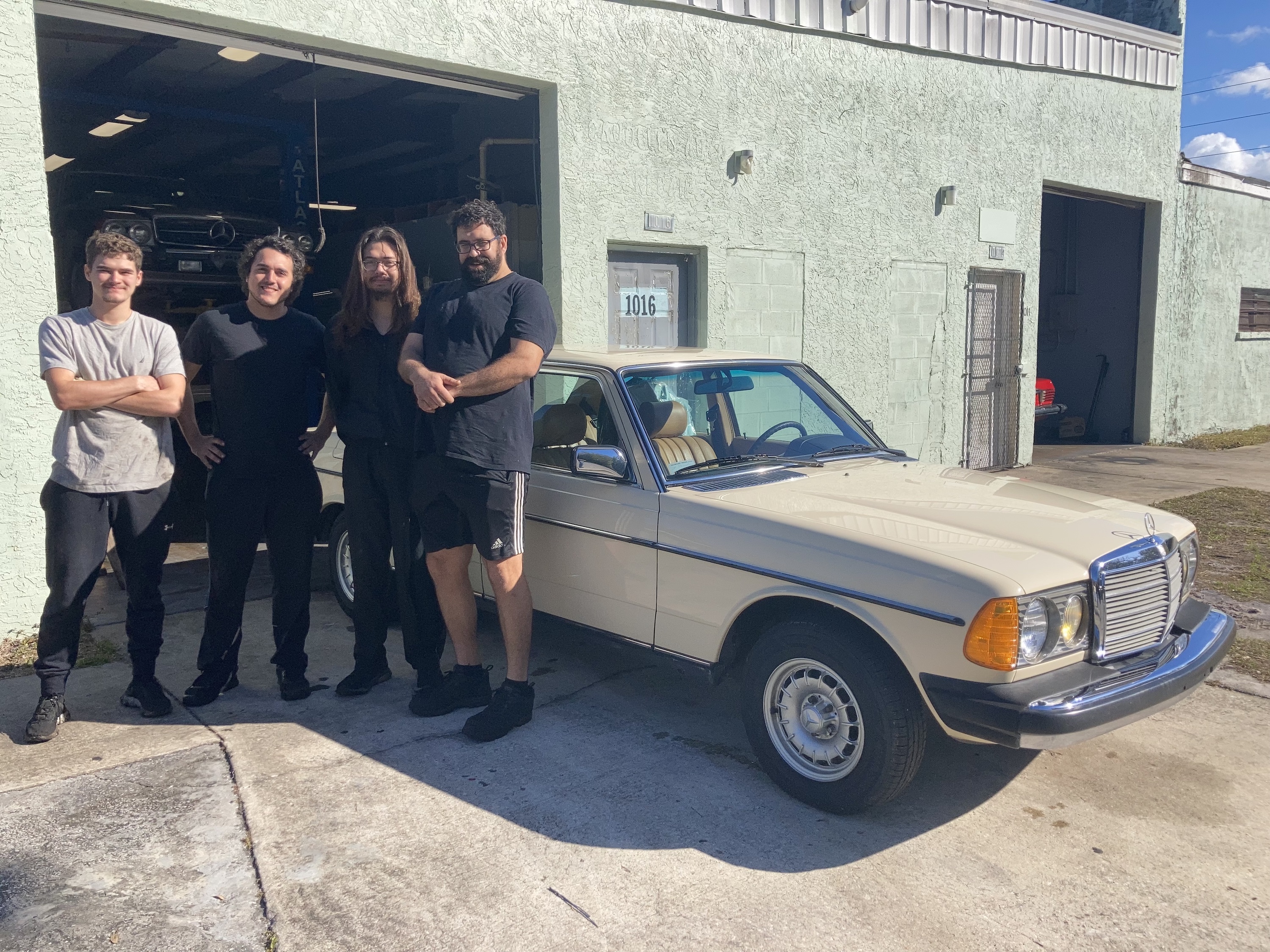 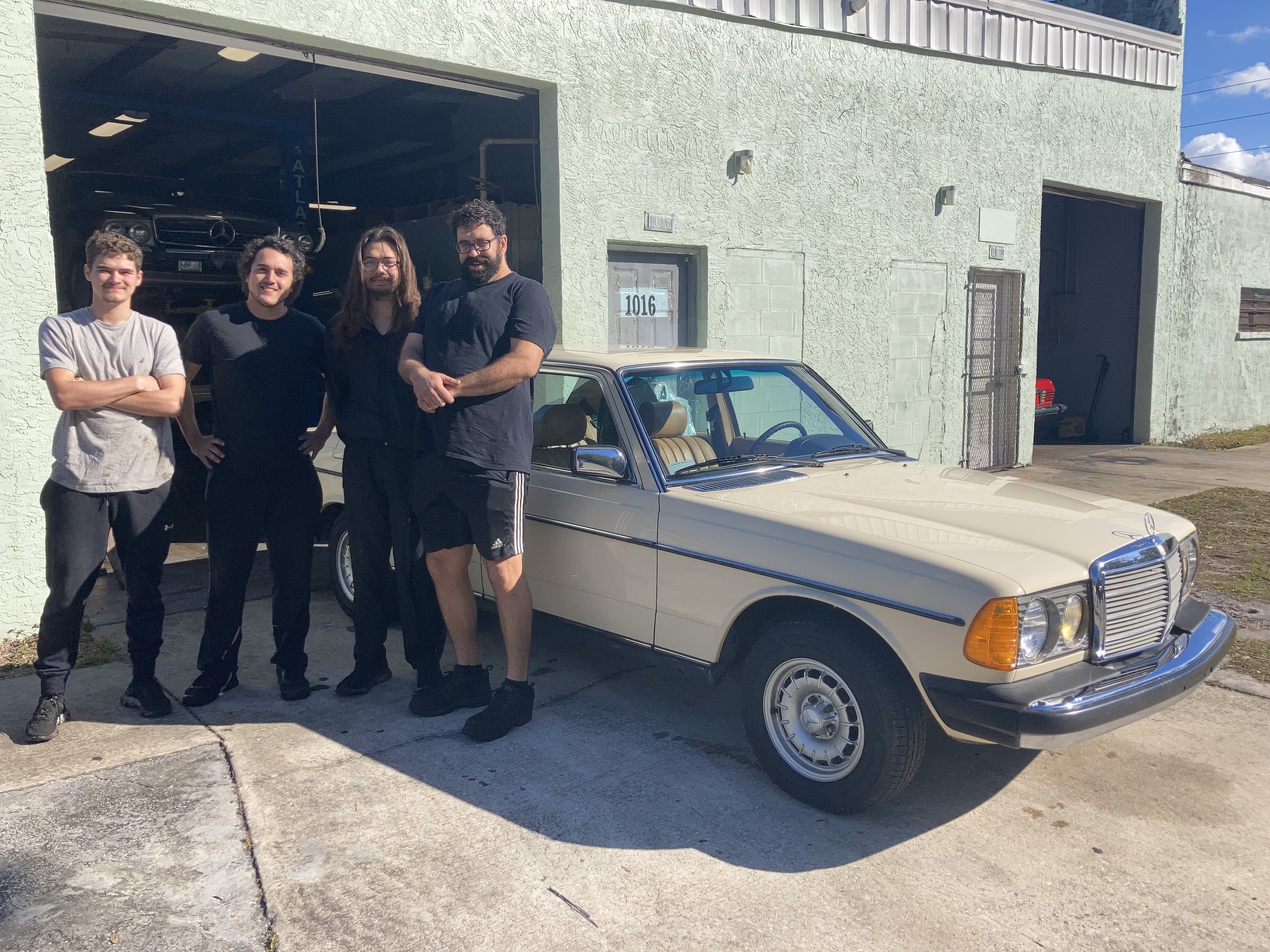