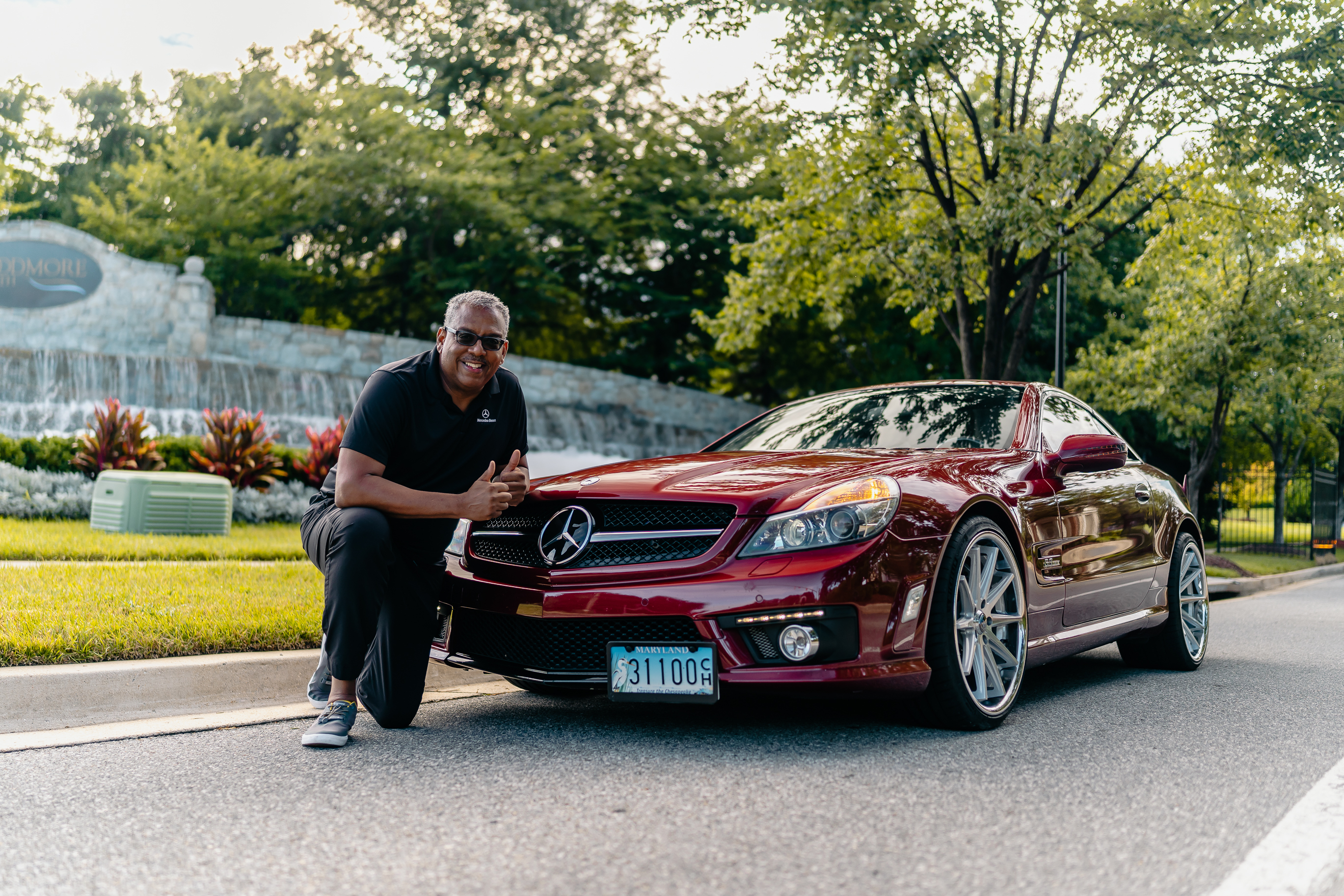 One of my classmates owned a tan 1976 230 Mercedes, while two had 1975450SL’s and one a 1977 450 SLC. The SL Series was a very expensive dream, but I really fell in love with the stately appearance and build quality of the 230, and really wanted to buy the six-cylinder 280. In other words, I had “star love” again, as the three-pointed star hood ornament really cemented my desire to someday own a Benz.

Growing up in a federal housing project in Baltimore, Maryland in the 1960’s during the Civil Rights struggle, I would often look to the skies as an escape from the reality my family faced as then Negroes in an unjust America. My dad was a victim of homicide when I was four, so Mom carried the burden of caring for an eight-person household. Things were tight, but momma always found a way to purchase the books that this insatiable reader craved.

Through reading about the galaxies, fantasy play with my Mattel Matt Mason doll, and looking at the stars with a knock-off version of a Tasco telescope, I often thought a career with NASA was in my future.

So, in the fall of 1976, I started the journey towards this goal as a 16 year-old freshman at the University of Maryland, College Park. My major? Aerospace Engineering of course. I wanted to help build the future of space travel after watching Apollo missions, and learning of impending Space Shuttle missions that would begin in the early 1980s.

Well things didn’t quite go as planned, as I sported a disastrous 1.3 G.P.A. after my first semester. Silly me. It seems that expertise in mathematics was a prerequisite for a career in the sciences. Since anything more complex than 1+1=2 was at the farthest edges of my math proficiency, I was in a true conundrum.

Luckily, I attended a meeting of the campus radio station, WMUC, and fell in love with the medium. So, I changed my major to Radio, Television and Film and graduated in 1980, but I never lost my attraction to stars. It was at UMCP that a different kind of star love took hold, as several of my well-heeled classmates drove Mercedes-Benz cars. This was at a time when the Big 3 were producing luxo-boats like the Lincoln Continental Mark IV, the Chrysler Cordoba, and the Cadillac DeVille. The Japanese brands (I drove a Datsun 260Z) were just getting a foothold with the Toyota Corolla, Datsun Z and 510 and Honda Civic gaining in popularity. VW Beetles were omnipresent, but other German brands like BMW, Porsche and Mercedes were rare, and were an indication that if you owned one, you had some real loot to spare, as the German luxury brands were significantly more expensive than the domestic brands.

One of my classmates owned a tan 1976 230 Mercedes, while two had 1975450SL’s and one a 1977 450 SLC. The SL Series was a very expensive dream, but I really fell in love with the stately appearance and build quality of the 230, and really wanted to buy the six-cylinder 280. In other words, I had “star love” again, as the three-pointed star hood ornament really cemented my desire to someday own a Benz.

In 1983, after stints at NBC radio and other private radio stations, I joined the federal government, with bulk of my career was spent with several U.S. Government agencies, including Voice of America. My VOA career evolved into me serving diplomatic missions with the U.S. Agency for International Development and the Department of State, where I worked in South Asia, the Caribbean and Africa on global pandemics for over twenty years.

My first assignment in Africa in 1985 took me to several West African nations, including Burkina Faso, Ivory Coast, Niger and Nigeria. There was one theme common in all of these countries- Mercedes-Benz automobiles were everywhere! Even the taxicabs were W124 E-Class sedans. Of course, the wealthier residents were chauffeured in W126 SEL’s and the like. The super wealthy drove G-Wagens, a vehicle I’d never seen before but absolutely loved. Seeing the “star” everywhere made me really want to own one, but I was still in the Datsun Z phase of my life.

That all changed in 1992, when the love of my life, my daughter Eden was born. At the time, her mom Elisabeth drove a 1989 Ford Festiva, a micro-car built by Kia for Ford; and I had a 1978 280Z. It was clear that there was NO way my precious cargo was ever going to take a ride in Korean or Japanese-built tin cans. Kia and Nissan (née Datsun) both produce very safe vehicles today, but then they were death traps.

After joining this excellent club and several forums, I decided to upgrade the eight-hole wheels on my Cab, with AMG Monoblocks the only way to go. After several years of Cabriolet ownership. I added a 1989 300CE to the family. I upgraded the CE with wheels from an SL55 AMG. Both cars were reliable and super fun to drive. Of course, I eventually had to replace the head gasket and wiring harness on the Cab (known problem areas. The CE was bulletproof. I would regularly take the Cabriolet to car shows, and in 2006, won 1st Place in the GWS Mid-Atlantic Concours d’Elegance. I was stoked!

So all was good in Benz Land until fellow GWS member Pete Engel told me one of his friends in Germany was looking for a Cab and asked me if I wanted to sell mine. I said if the price was right, I would let it go, as I really wanted a R230 SL500. As and automotive journalist, I’d driven several iterations of the SL500, and knew the two-seater was my kind of car in terms of looks and performance.

So a representative for the German friend was dispatched to my home in Maryland where he spent most of the day pouring over the car and the records for it. SOLD! The buyer had the car shipped to North Carolina where his U.S. business was based, and still uses the Cabriolet as his getaway-from-reality cruiser.

After I sold the Cab, I also sold the CE, but bought two more over the years. Nice cars, but the dream of the SL still loomed large in my mind, so in 2017 I started my SL search, scouring Craigslist and other portals every day.

In December 2017, I was on a media program with Toyota to look at Black History sites across the south. One evening in Birmingham, Alabama, I was perusing Craigslist and found the perfect car for me – a 2009 SL63 AMG, and the car was listed in Upper Marlboro, Maryland, just 15 minutes from my home. But I was in Alabama!  So I called the second owner, John, and after a long talk about the car’s condition, I explained on a Tuesday in Alabama that I wouldn’t be home until Saturday, and I asked him to hold the car  for five days. Of course he said “no,” but a $1,000 deposit via PayPal secured the hold.

I drove the car that Saturday, and took it to a local Mercedes dealer the following Monday for a successful pre-purchase inspection. Turns out the first owner Edward (who was and may still be a MBCA member) had a full service history at the same dealership. The 2009 SL63 featured the M156 naturally aspirated motor, which had a few issues that would need addressing over time, like lifters that would need replacement. Ed had all of the ills of the M156 fixed, and spent an additional $40k on a $161,000 automobile to customize it just the way he wanted it to be.

On that Monday after the PPI, SOLD! Mission “Star One” complete. My car is finished in rare Storm Red, with the panoramic roof. It looks awesome!

Mission “Star Two” was executed in May, 2019, when I purchased a mint 2005 CL600. One day, while perusing an AMG forum on Facebook, I saw the CL600 listed. The photos which follow were taken by the seller, a fine chap named Adam Benjamin who owns SoCal Tires in San Diego California. Adam sells mostly Mercedes cars that he’s given the “SoCal” treatment to. More details to follow. The CL was the first car I’d ever purchased sight unseen, but Adam had impeccable references and I had the car shipped to Maryland via covered transport. I love all of my Benzes, but the R215 CL600 Coupe is one of the most stunning designs in automotive history, IMHO. The long, flowing hood, lack of a “B” pillar and high decklid give the car a super sensuous, seamless look. The “V12” badges on the front quarter panels mean you should think twice before engaging road combat.

Mission “Star Three” was executed in August, 2020, when I purchased another minty car, a 1995 E320 Coupe. Since I had sold all of my previous W124 variants, I really missed the E-Class cars, and found this gem on Craigslist as well. It’s a car that I purchased locally, and all that ills the late W124 cars (again, the wiring harness and head gasket), had already been addressed.

So the three points of my personal Mercedes-Benz Star have been completed. It would take a fit of madness for me to relinquish any of my Benz loves from my collection. And why would I sell? Through MBCA, I have the knowledge and resources at hand to keep my cars in absolutely mint condition.

Some who see the following pictures and descriptions of each car may not like a few of the mods that either the previous owner did and I kept them as is, or I did myself. It’s usually the aftermarket wheels on the SL63 and the rear bumper addition that cause some consternation. But please recognize that this is the way I want to keep the car, and customization is a personal choice!

Let’s get into the modification details of each car! I’ll start with the senior member of my Star Group.

The only other mod I will do is take a bit of “air” out of the front fender. The gap between the tire and fender bottom is a bit much for my liking. I’m thinking about a four-wheel spring/strut/shock kit from Eibach or other company. I don’t want to kill the excellent ride quality of this gorgeous coupe, so will research carefully.

Adam Benjamin of SoCal Tires really did a nice job with this car:

It should be noted that I will change the wheels on the SL63. I’ve purchased the wheels, and they are also Rohana wheels, but in bright silver finish instead of chrome/black.

And that’s it! I’m proud to own all of my Mercedes. I also bought a 2006 S430 4Matic that I’ve since sold. Each has unique characteristics, but they are all super fun to drive and show!

Will there be another Benz purchase in the future? Stay tuned!