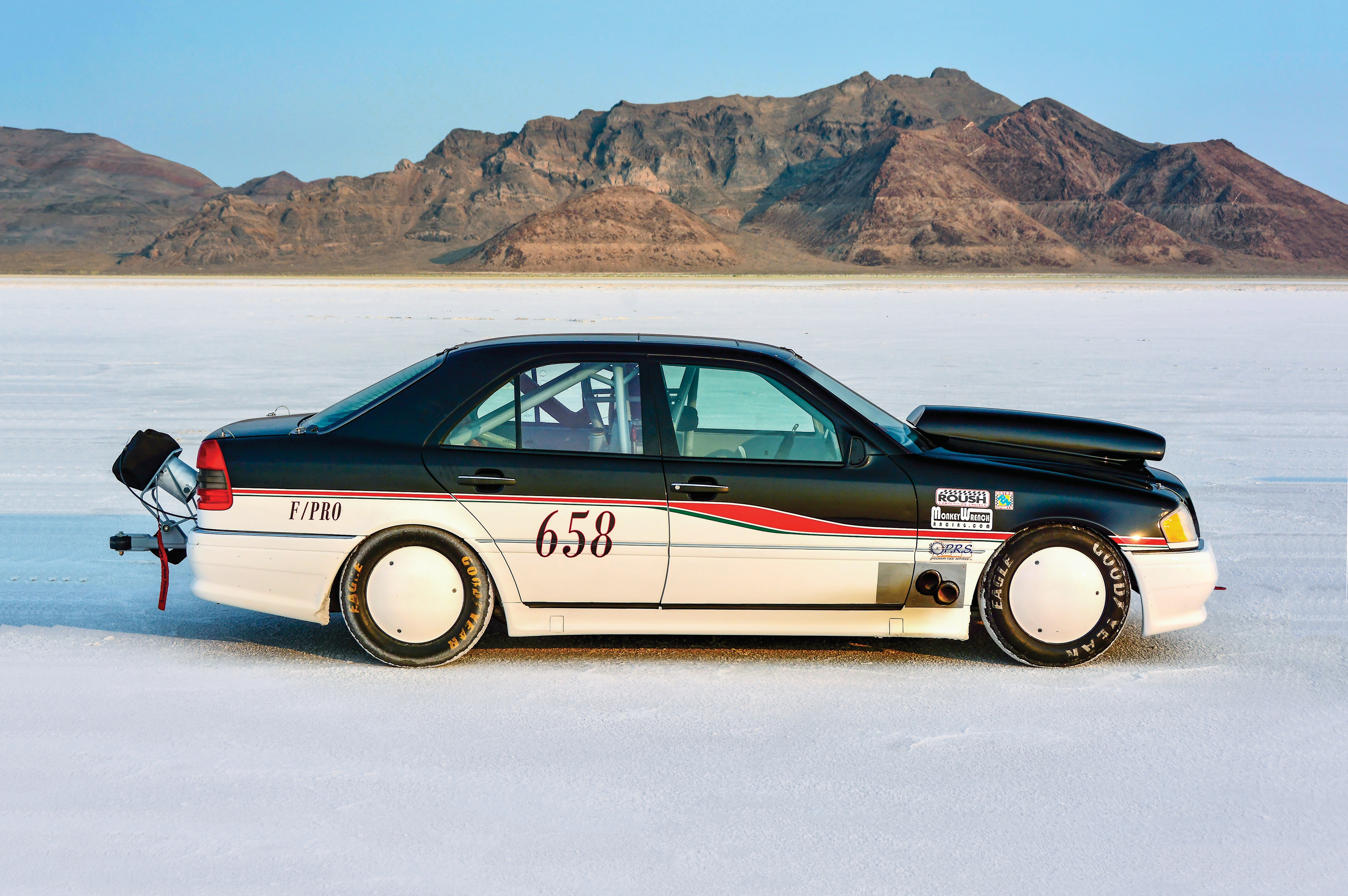 The longtime MBCA member, Gull Wing Group member, and Bonneville Salt Flats racer Bob Sirna has been a car nut since birth, and a GM Fisher Body Craftsman’s Guild prize winner for models he designed in his teens. Born into a GM family, he graduated from Notre Dame with an engineering degree and worked as a designer at Ford Styling before heading off into computing as an IBM salesman, then forming his own company in IT professional staffing services and real estate.

After showing his navy blue Gullwing and 300SL roadster twins and vintage-racing his silver Gullwing for years, he got his first taste of Bonneville 20 years ago in the company of MBCA members, Gullwing owners and racers Lynn and Roberta Yakel. Sirna got his first Bonneville record, 190.759 mph, with his 1955 3.0-liter Gullwing, in 2016. (See the May-June 2021 issue of The Star).

In 2021, he ran two different Bonneville programs, one with his Mercedes-Benz-powered ’29 Ford roadster, and the other with a 1996 Mercedes-Benz C280 sedan purchased from a California charity that was the donor car for the roadster’s engine.

The C280 was stripped and gutted at RM Motorsports, in Wixom, Michigan, then slowly built up over two years while the M104 engine development program continued at Roush Competition Engines in Livonia, Michigan. The Roush facility is the home of 300 NASCAR wins, a boatload of IMSA and SCCA sedan championships, Indy engines, Pike's Peak engines, and so forth.

The body of Sirna’s 1996 C280 is essentially stock, with an excellent drag coefficient of 0.31. It sits low to the ground, but has no aero improvements front or rear. Not allowed. Simple QA1 coilover suspension at all four corners sit atop relatively light and simple steel wheels with flat covers, Goodyear 25 x 4.5 x 15 salt tires, and disc brakes by The Brake Man. The car carries a mandatory drag chute, and has miles to slow down before turning off the course. The driver’s window is still powered, for convenience.

The interior of this race car is all business, built by master fabricator Dan Kenny of RM Motorsports. The driver’s cage and seat, oil tank, driver helmet cooling system, 20-pound fire system, chute trigger, MoTec data panel and ECU, and the blank dashboard are minimalist, modern, and beautiful. The big black shifter controls a Tremec 6-speed transmission with Liberty Gears ratios tailored to the engine’s high rpm, while the rear axle ratio is a very short 4.86:1. The yellow handle on the transmission tunnel is for the parachute, and the red handle is for the onboard fire suppression system.

The engine in the Sirna C280 is a masterpiece of three-liter engineering, crafted by Roush Competition Engines. An adaptation of the Roush Chevrolet Indy V-8,  the engine is designed to run at wide-open throttle at up to 10,000 rpm for up to five miles.

Although the cylinder head and the engine block are stock Mercedes parts, everything in them and on them is custom-made  by Roush for this application, including the gorgeous billet cam cover. Roush also designed a dry sump oil pan that acts to strengthen the engine block. The engine contains a Sonny Bryant forged crankshaft, Carrillo connecting rods, and Diamond Racing pistons. The camshafts were ground to Roush specs by Comp Cams.

The engine breathes through a hood-mounted air scoop tightly sealed to the engine air box that leads to six 52 mm intake throttle bodies. Fuel arrives by port injection. Ignition is performed by six Accel Supercoils controlled by the MoTec engine management system. The system is capable of switching tuning parameters and fuel maps with a few keystrokes on a laptop. The exhaust headers, designed by Roush’s Dennis Corn, use dual three-into-one downtubes and two collectors exiting through the right front fender. Precision Racing Services did all of the electrical and electronic hookups.

On a good day at sea level, this engine produces about 430 horsepower at 9600 rpm on race gas, or 143 horsepower per liter, naturally aspirated. The power drops off a bit at Bonneville, because the salt is up around 4,400 feet and the engine has to deal with the August heat.

The ancillary systems in this very specialized car are quite different from production. There is a radiator mounted in front of the engine to meet regulations, but it doesn’t hold any fluid and it doesn’t cool the engine. Engine cooling is accomplished by a belt-driven Meziere water pump and a liquid-to-liquid intercooler system that uses 50-100 pounds of ice slurry in the trunk-mounted tank for each run down the Bonneville Salt Flats course.

The engine lubrication system is likewise unique, a 10-quart Barnes Systems dry-sump oiling rig pumping Mobil 1 Racing 0W50, with an internal and external oil heating system that runs off a small generator while the car is in the pits but gets picked up and carried on the push truck while the car waits in line. A very hot oil temperature, 180-200 degrees Fahrenheit at startup, is required to keep fast-moving parts lubricated during 9500-rpm runs through the six gears.

The nut behind the wheel

Team driver Matt Price, of Monkeywrench Racing, in Commerce, Michigan, a company that specializes in race cars with small engines, took the car on its maiden voyage in the spring of 2021 to the East Coast Timing Association meet in Blytheville, Arkansas, and the car ran flawlessly to 175 mph in two kilometers or 1.2 miles.

At Bonneville, the hefty 3,979-pound Mercedes-Benz C280 ran 172 mph into a stiff headwind on the short course. With that run in the books, Sirna knows the car is easily capable of smashing the F/Production record of 167.158 mph on an official run next year.

After it gets the F/Production record, this beautiful race car may get even more records in the Modified class with some streamlining and nitro/alcohol fuel. An even smaller engine, a Synergy S2000RR 2.0-liter V-8 using a custom block, a pair of high-performance motorcycle four-cylinder cylinder heads, and a 14,000-rpm redline may fill the engine bay someday. The future may also hold a 2.0-liter, 300-mph G/Fuel Streamliner. Sirna’s working on it.