Me and My Pagoda 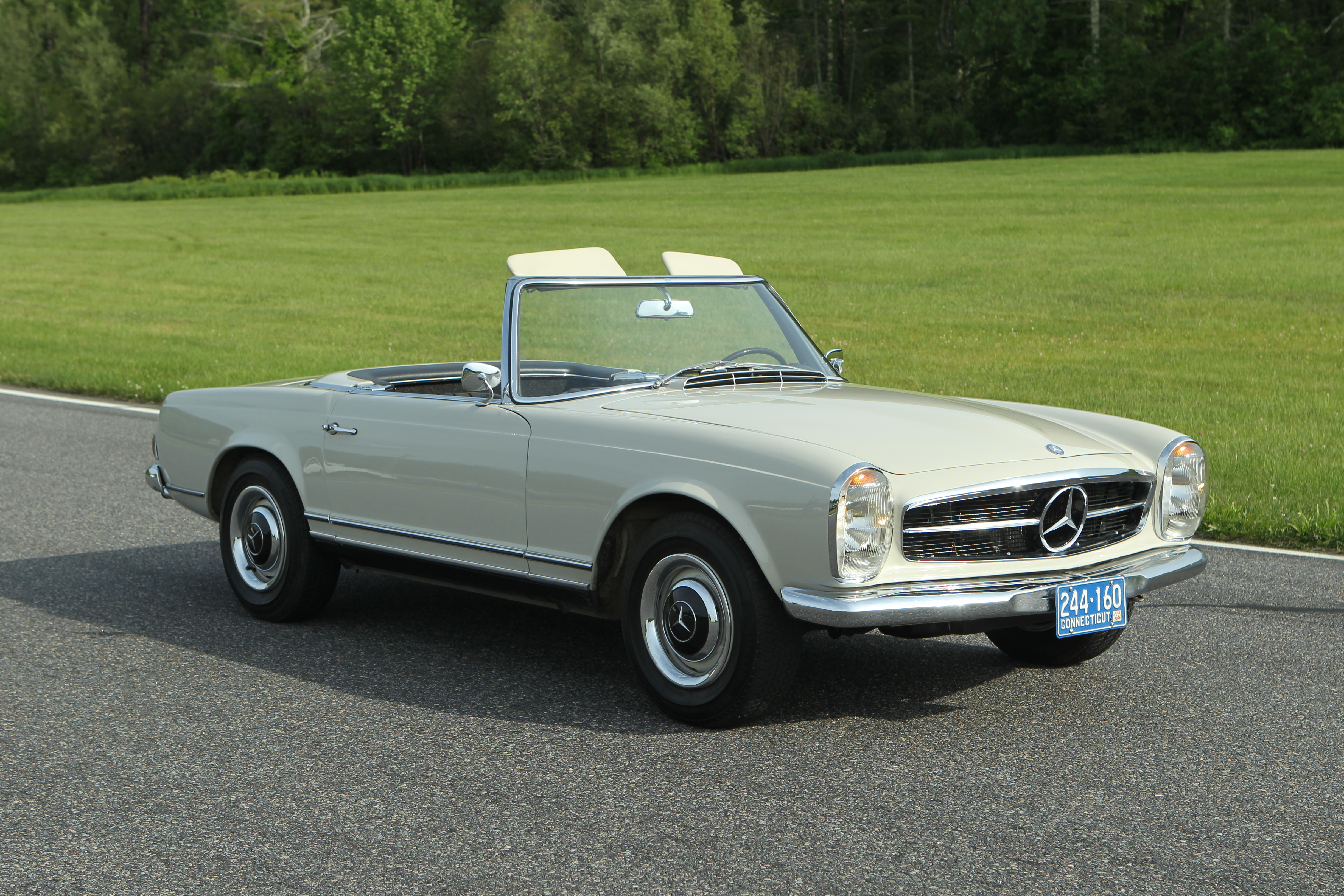 My twenty-year love affair with a 230SL

My affection for any and all things automotive started at an early age, but my particular affection for the Baureihe W113 – better known as the Pagoda – began with a red Tekno model that my sister gave to me following a European trip. Such exotic toys could never have been found in my small New England hometown! The proportions of that beautiful little red car stayed with me, and a few years later I sent a note to Mercedes-Benz' then-headquarters in Montvale, New Jersey. I typed it to make it seem like I was a legitimate customer. I requested any information about the car, which someone – perhaps even the revered MBCA liaison Maryalice Ritzmann – dutifully acknowledged with a brochure and some press photographs.

Once I began driving and had learned a thing or two about how to fix cars, I started looking around for a real SL. Sadly,  the only ones I could possibly afford were rusted hulks, perforated by the pest that is New England winter salt. Then as now, they were difficult and expensive to restore. Instead, I opted for a Sunbeam Tiger, a more potent though less sophisticated alternative.

My professional career started at Automobile Quarterly magazine and then Road & Track, but after editing some books for Nissan about the development of the 300ZX and the Infiniti brand, I decided on a career change that took me to General Motors after a turn in graduate school. I began with GM in Detroit, but after signaling a desire to move to Europe, I was assigned to GM’s German Opel division outside Frankfurt, where there was a thriving classic car community, both inside the company and out.

In 1999, I was invited by like-minded Opel gearheads to the annual Essen Techno-Classica, which takes place in a vast series of halls crammed with classic cars, parts, and automobilia. Suddenly there were Pagodas everywhere, though none seemed quite right: some were too expensive, while others were too rough to warrant the level of restoration their lower prices would have required. Just as I had given up and was about to head back to Frankfurt, I spied a Weissgrau 230SL, complete with a black hardtop and my most important priority – a four-speed manual gearbox. I agreed on a price with dealer Otto Tönges – a noted Jaguar collector and sailplane pilot –  and the car was mine. I just had to pick it up from his shop in Göttingen, about 250km from Frankfurt.

The following Monday, aquiver with excitement, I boarded the train to Göttingen and handed over to Herr Tönges what seemed like a suitcase full of Deutschmarks (the Euro wasn’t official yet). On the return trip, I quickly learned how a Pagoda acted on the Autobahn; I wasn’t going to spend a lot of time in the far left lane! The car wasn’t really slow, but it wasn’t much fun to drive beyond 130 kmh, something I would later discover many Pagoda owners addressed with taller rear-axle ratios and various 5- and 6-speed transmission alternatives. On the other hand, I was surprised at how refined the car was at speed: the engine ran smoothly, the ride was compliant without being soft, and the manual steering – though heavy at slow speeds –  was direct and straight on the highway. Overall, my 230SL made a very positive first impression.

I decided to confront the local Kfz-Zulassungsstelle, otherwise known as the German DMV, on my own rather than asking for outside help. In Germany, as you can imagine, there are rules governing every aspect of automobile ownership. Cars undergo routine rigorous inspections, and any functional modifications require written documentation in the registration documents. My car, for example, was equipped with incorrect (for the model year) Fuchs “Bundt” wheels, but fortunately they had been duly noted and wouldn’t be an issue.

Although my German was fairly good, it was still intimidating to deal with the registration authorities. The Germans know a thing or two about process and the first stop in getting a vehicle registered is a desk whose occupant’s sole task is to ensure that your papers are all in order – otherwise you might interfere with the department’s orderly operations. Fortunately, everything the seller gave me was "in Ordnung" and I was soon on my way to buy license plates, which are stamped to order outside the registration building.

Within a few days, I had a chance to survey my acquisition in greater detail. It was a decent 10-footer with a good repaint, though there were a few portentous rust bubbles. The MB Tex seats, as is so often true on unrestored Pagodas, looked a bit deflated. The carpets were worn and there were a number of small “parking rash” dents in the door. The top was tired, but the seller had provided me a new one. Little did I know what a job that would be!

My first task was to find someone to help with servicing. I learned from an Opel colleague that there was an excellent Mercedes-Benz repair shop not far away in Mainz. There I was enthusiastically greeted by Walter Pusch, a bear of a man with a winning smile and a small shop filled with interesting classics, including 300SLs, 600s and W111s. Here was what the Germans called a true Meister – an expert with years of factory training and dealer service experience. Herr Pusch had started as an apprentice with Mercedes in 1961 before joining the large dealership in Mainz, eventually rising to become the Werkstattmeister, or chief mechanic. He had left in 1991 to start his own service facility.

By the time I encountered Herr Pusch, we had welcomed our daughter Lucy into the world and my wife was willing to let me take her in the SL as long as it had modern seatbelts. Herr Pusch dutifully responded by installing three-point retractable belts, which functioned perfectly with Lucy’s baby seat. Further work followed such as a new top, new carpets, and seats reinvigorated with fresh springs and horsehair (Herr Pusch steadfastly refused to let me replace the MB Tex with “inferior” modern materials). The 10-footer was now closer to a 5-footer.

After several years at Opel, it was time to start discussing my next position with GM. In the meantime, the SL was showing increasingly expensive signs of age: creaky suspension, telltale bits of blue smoke while shifting, and those threatening rust spots. At the time, I was hoping to stay in Germany, managing a forthcoming car program that would become the Opel Insignia –  later known as the Buick Regal in the US –  but an alternative offer to work with GM’s joint venture in China came along at about the same time. As I less-than-enthusiastically mulled over that possibility with my boss on the phone, my wife slammed her elbow into my ribcage, silently informing me that she thought we should move to China. As has been so often the case, she was right.

The car stays behind

But that left me with a dilemma – what to do with the SL – which couldn’t join us. A few months earlier, I had gone to Essen again, this time purchasing a pristine, French Blue Alfa 1600 Junior Zagato. In the meantime, I had begun discussions with Herr Pusch around doing a full restoration on the Pagoda, though the cost was going to be substantial given an engine rebuild, body repairs, and a full repaint amongst other things. Unexpectedly, a GM friend found a buyer for the Zagato and I now had the funding to start the restoration work on the Pagoda. I’d be back to pick it up in three years, I told Herr Pusch.

Well, that never happened – three years became many more as I moved through several assignments in Asia. Along the way, I was able to swing through Mainz on occasion to check on progress, marveling at the detailed work on the engine as well as the meticulous preparation for paint. Herr Pusch was a stickler for detail and quality, and he routinely took pride in showing off rare parts that he was able to obtain as well as the restorations he was doing on other cars, particularly 600s, which were always his favorite.

After retiring from GM in 2017, we found a house in Connecticut with enough garage space to accommodate the Pagoda (as well as a BMW 3.0 CS that I had also acquired in Germany) and I arranged to have both cars shipped to Charleston, where my good friend Stellario and I had the opportunity to drive the cars north, starting on the lovely Blue Ridge Highway. By then, it had been 13 years since I had last driven the SL, but I needn’t have worried. Herr Pusch’s fine work rewarded me with the typical Pagoda qualities of refined if modest performance, responsive steering, a controlled but comfortable ride, and characteristic Mercedes build quality. Once home, I entered the car in the local Lime Rock Concours in September 2018, where much to my surprise, I took first place in the postwar European class.

With more time on my hands, I’ve had a chance to study how the Pagoda came to be –  a process that has always interested me. What we know as the Pagoda was originally planned as a six-cylinder version of the 190SL. However, the amount of engineering required to replace the 190SL’s four-cylinder engine with a six, along with the need to create a new manufacturing line for the forthcoming W111, nixed the upgraded 190. This decision prompted the idea of a smaller, two-seat version of the W111 that become the Pagoda. In retrospect, we’re fortunate that the six-cylinder 190 upgrade didn’t work. All of this is detailed in Günther Engelen’s exhaustive 190SL and Pagoda history, Vom Barock zur Pagode, sadly only available in German.

I also had a chance to go through some of the paperwork that came with the car, learning that its second owner was Jacques Pauwels, a French teacher in Southern California. Tracking down Jacques through the marvels of the Internet, I learned that he had purchased the car from its first owner, a Robert Testanière, who taught French in Madagascar and stored the SL at the Paris-based distributor, Royal Elysées, in the winter months. Jacques also supplied me with the original data card and some other French documentation. But the real treasure was yet to come – three large boxes of NOS parts that Jacques had acquired in Germany as part of his multi-Pagoda ownership experience.

Thanks to Herr Pusch’s fine restoration, there’s little work to do on the car today, but I’m fortunate that Hans at Xaver’s Foreign Car in nearby Newburgh, New York, helps me keep it in good shape. One of my tasks has been to try and return my car to its original French configuration. As detailed on the excellent SL113.org website, French cars had a short list of unique equipment, including the expected yellow headlight bulbs as well as amber-tinted backup lights; a homologation requirement that has always mystified me. Finding the bulbs was easy, but the French tail lights are very rare. It’s taken me a decade to track down a matched pair.

I have the good fortune to own some fun cars, including the 3.0 CS and a 993, but on a fine day, the SL is always my first choice. My friend Wayne Carini always says that you should only own a car that you look back on at least once after you’ve parked it. Every time I open the garage door for the SL, I marvel at both its perfect proportions as well as its incredible technical sophistication. Lately, I’ve been teaching my daughter Lucy how to drive the 230SL. It’s going to be hers some day and I want her to treasure it as much as I do. 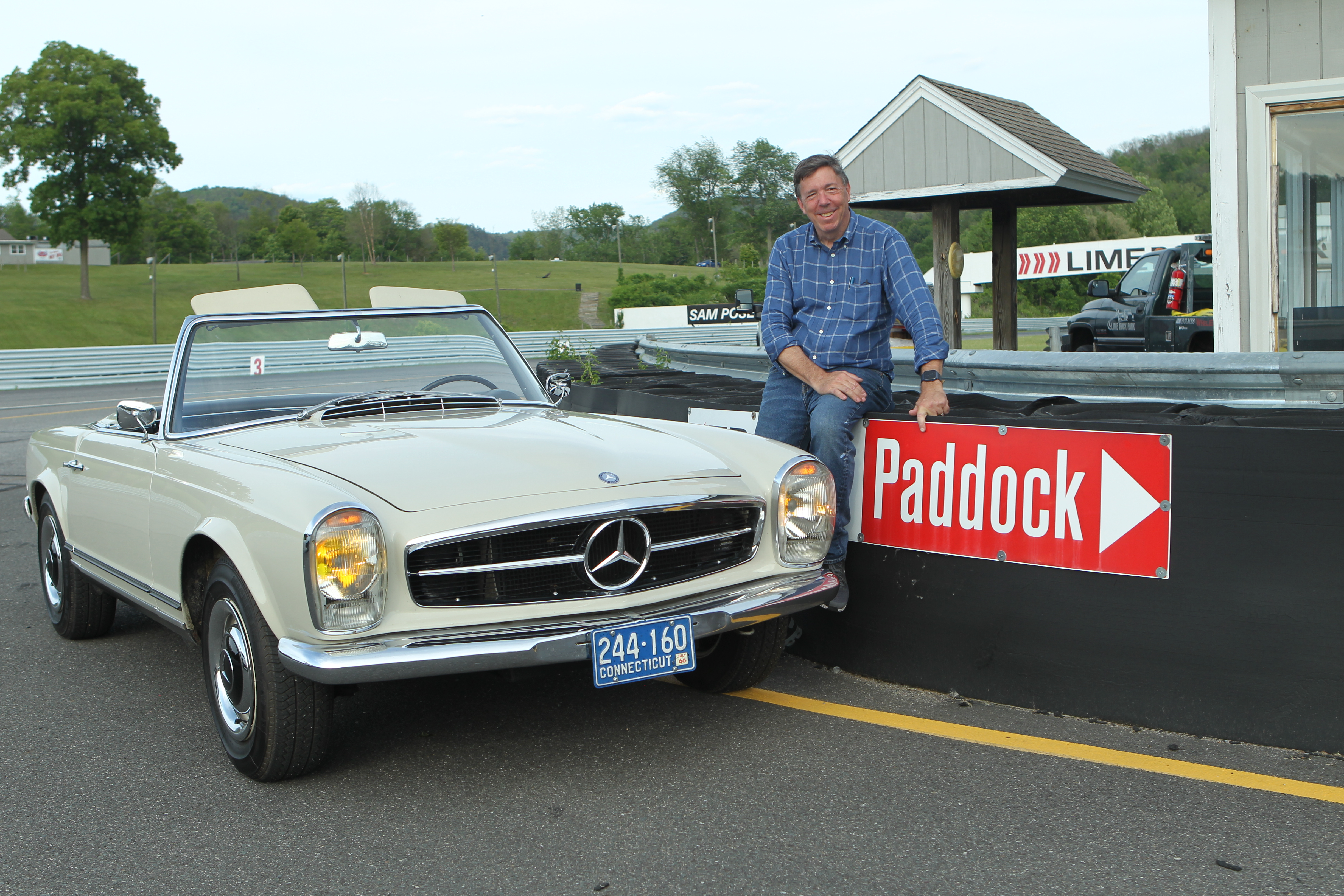