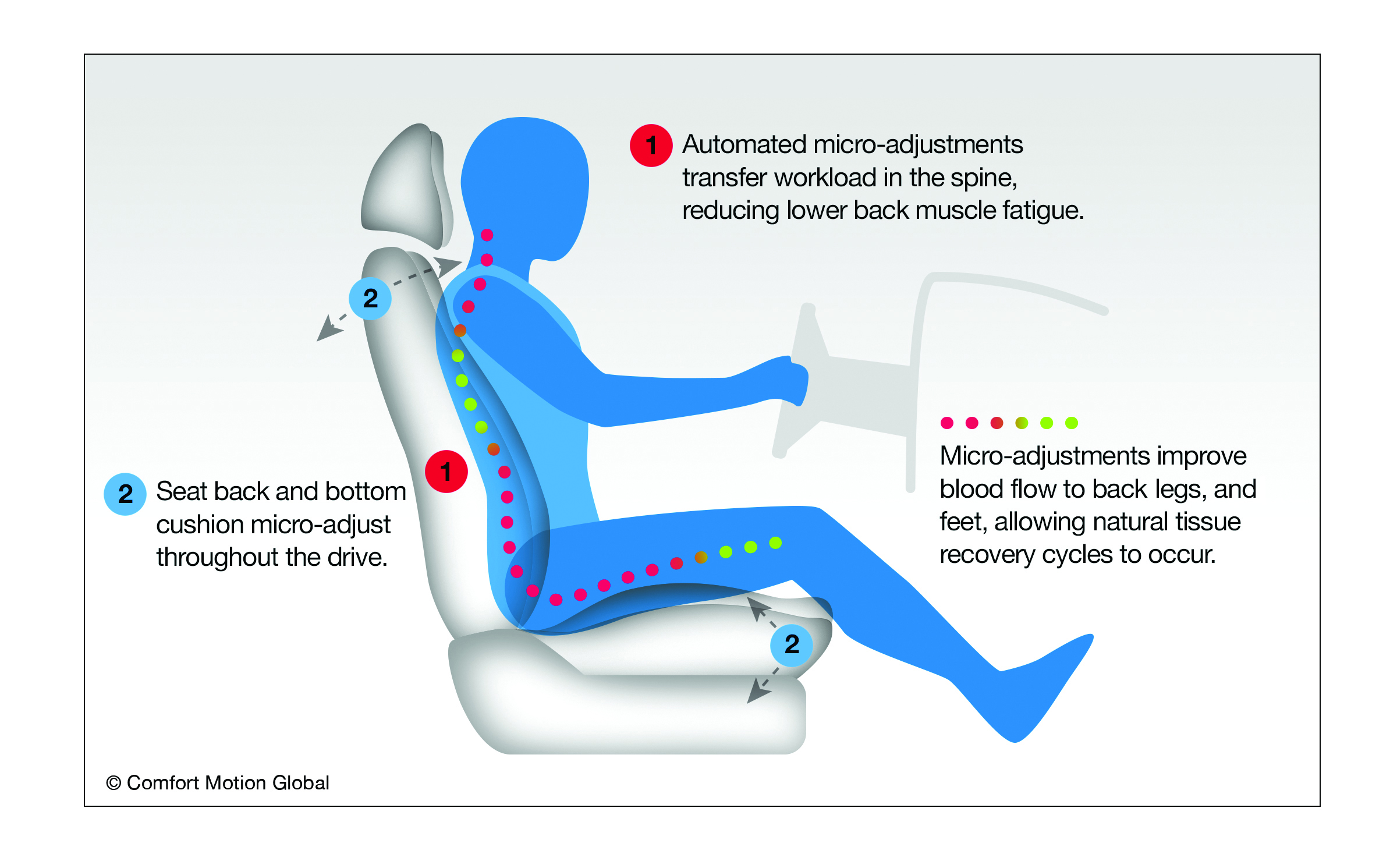 Since the dawn of the automobile, people have been climbing out of their cars after a long journey and taking a few moments to stretch. We've all experienced the need to wrench our  bodies out of the cramped position that driving often forces on us. But why should we put up with that?

That's the question that occurred to MBCA members Lew Derrickson and Dr. Paul Phipps, who brought experience from sports medicine to the automotive world.

"I'm a sports biomechanic and a chiropractor," Dr. Phipps tells The Star. "One of the complaints that I kept hearing came from people who were spending longer periods of their day in their vehicle. Anyone from medical sales reps, pharmaceutical reps, to state police, and truckers. It was a lot of people and they all have the same kind of back issues that go that type of environment. You sit for a long time, you strain certain tissues and it causes problems. So I would work with them for a day or two while they're in town. Then they'd feel great for about three days and then get back in that same environment and start having the same symptoms."

Looking at the driver's seat

Dr. Phipps went to see for himself how the cars' seating positions were affecting his patients.

"I found myself out in their cars trying to figure out ergonomically if they were sitting correctly," he explains. "I knew that it was repetitive accumulative fatigue patterns that were setting in because they're sitting in the same position all day long."

Sports medicine and biomechanics experience told Dr. Phipps that the answer was to move around a little more.

"I wanted to have them redistribute their body weight," Phipps says. "So how can I change that? I asked them to manually move their seat about every 10 minutes during the drive. Just lay the seat back a little bit, maybe bring their seat cushion up in the front, bring the lumbar support in. Just do some things that will change the weight distribution in the seat to fatigue different tissues."

That idea worked pretty well, when the subjects remembered to do it.

"The problem is they're busy, right? So unless they're hurting, they would forget to change their seat position to do this."

That's when the light bulb went on.

"The idea was, was how can we automate something that would move the seat like that? I'm not in the automotive field, so I'm looking at the car from the outside. But what can we do to make this a better situation for people? That led to me asking them to use an audible timer that would remind them to move their seat. That became much more successful! But it was a big lift to take a concept like this and introduce it to a company like Mercedes-Benz."

That's where Lew Derrickson came in. He was a patient of Dr. Phipps at the time.

"He had a brand new Mercedes-Benz with something like an 18-way adjustable seat," Phipps says. "He's had a couple back surgeries and some chronic issues and was really excited when he got this new Mercedes with an advanced seating system. Then he drove it from Indianapolis to Chicago and back on a business trip and told me his back still fatigued in that seat. I shared what I had been doing with my clients and he said look, let's get this in front of a few people and see if it has legs. We started there and that's how it kind of how our company formed."

Proving out the concept

The two men spent a couple of years developing the idea and testing the science behind it. They partnered with research universities including Ball State and Logan University, and with the Rose-Hulman Institute of Technology. By the end, they had developed Comfort Motion Global as a company, and the product, called Healthy Seating Technology.

Research found that Healthy Seating Technology reduces discomfort as well as physical and mental fatigue, and increases driver alertness. It also relieves physical pressure points and improves circulation in the legs and feet.

"At the end of that time we realized that we can move the seat automatically, and we can do it in a safe manner," Phipps says. "The driver has a responsibility to the steering wheel, to the pedals and to watch the road. So there are a lot of things you have to take into consideration when you're moving the seat."

As it turned out, the software that handles seat memory is capable of making adjustments to the seat position automatically, and the equipment is very robust because it's designed to work through the entire service life of the vehicle.

"For the next phase, we partnered with Ball State University," Phipps explains. "They have a phenomenal biomechanics lab that does a lot of research for big corporations and the US military. We had their PhDs design a three-phase study to look at the impact of this technology. We set up four simulators called 'bucks' in one of their research centers with seats and steering wheels. Everything was ergonomically positioned correctly. We went through about two and a half years of work with them."

When the studies were done, Comfort Motion found that they could achieve a 50% reduction in discomfort, and improved blood flow to the lower body. Tests also showed an improvement in driver alertness after  three and a half hours in the seat.

"As we were looking at commercializing this," Phipps says, "one of our partners had helped manage some work for Lewis Hamilton when he moved from McLaren to the Mercedes-AMG team. So he had contacts way, way up at Mercedes and gave us an opportunity to go in and present the technology to  their head of interior and their head of their seating."

The reaction was immediate and positive.

"They said, not only do we understand what you're doing and what you want to accomplish, but we didn't see this," Phipps recalls. "They told us, this is a whole new dimension of seat technology that's never been thought of or introduced before."

Mercedes-Benz jumped on the Comfort Motion technology, and while automakers never move very quickly, this went about as fast as anyone could expect.

"It was a phenomenal relationship," Phipps says. "Not only did they give us the time, but they believed in us. They got behind this technology and they drove it into the lineup. We don't find that with the other OEMs because there are so many layers of bureaucracy."

With the science done, it was Lew Derrickson's turn to manage the business side.

"It's important to note that Mercedes didn't just take our research," Derrickson says. "They believed our research, but they did their own in-depth research over several years. That included medical research, but also consumer awareness and consumer appreciation research. After all of that, they gave us the green light. Now we're in all the memory seats offered by Mercedes. If you have a memory seat made in 2019 or later, it includes, Energizing Seat Kinetics. That's what they call it. It started rolling out in the GLA, GLB, and GLC, and then moved up through the GLE, GLS and then the S-Class and then the C-Class. The last one is the E-Class, which is just rolling out now."

Mercedes-Benz is proud of this tech

Mercedes-Benz has been rolling out the marketing for this dynamic invention.

"The best seat position is the next one," says the company's marketing materials. "Mercedes-Benz is now introducing an innovation that supports switching seating positions in the form of ENERGIZING seat kinetics."

As developed the system uses the electric seat adjustment. If the driver selects the kinetics program, the inclination of the seat cushions and backrests are continuously yet minutely adjusted using the seat settings selected by the driver and the front passenger as the starting point, called the "Home" position. The changes are only minimal - a few degrees or millimeters. The "closed" position is initially started with the seat cushion inclined backwards and the backrest forwards, followed by the corresponding "open" position with the opposite inclination. If multicontour seats are installed, seat kinetics also includes the lumbar support.

In Mercedes-Benz vehicles, the system offers three programs for short, medium-length and long journeys. Convenient selection of each program is supported through the Mercedes-Benz User Experience (MBUX) system.

If you own a late-model Mercedes-Benz, or if you find yourself at the dealer for a test drive, be sure to ask the MBUX system turn on the Energizing Seat Kinetics, and take a moment to thank your fellow MBCA members Dr. Paul Phipps and Lew Derrickson for their contribution.