Adventure Begins Where The Pavement Ends The Gambler 500 Rally offers low-cost fun with a purpose

You need three senses to truly appreciate the Gambler 500 Rally: a sense of adventure, a sense of stewardship, and – above all – a sense of humor. The Gambler combines all of those into an automotive experience unlike anything you've ever experienced before.

A sense of humor

If you haven't heard of it, the central idea of the Gambler 500 is to have fun exploring America's great off-road wilderness areas while spending as little as possible on your vehicle. The Gambler doesn't really have any rules and it's not competitive, except perhaps to see who can have the most fun. The vehicles used on the Gambler are, for the most part, examples you would expect to see stacked up in a junkyard. Indeed, many have been salvaged from those forgotten graveyards of steel to be revived for one last mission.

Participants have a keen sense of humor about their rides. Most are decorated with irreverent slogans and mismatched parts. The event center, called Gamblertown, is a pop-up community located on a huge gravel parking lot behind the county fairgrounds. There's a stage with live music, food carts, and hundreds of Gamblers camping out for the weekend.

At Gamblertown you'll see everything from stretch limousines to vintage sports cars, all raised up and riding on off-road tires. It's like a scene from a Mad Max post-apocalyptic movie, except everyone's having a good time. They even have a HooptieX (pronounced HOOP-tee-cross) where you can race your creation around a 1.7-mile dirt race course.

Mercedes-Benz vehicles make up a small but intense portion of the fleet. To become part of the event, we obtained a well-loved 1998 ML320 SUV, showing over 208,000 miles on the odometer by the time we arrived at Gamblertown to join the party. Arriving in considerably more comfort than most Gamblers, we soon found several other Mercedes: a couple of eye-popping S-Class cars saved from junkyards, something that used to be a Mercedes-Benz sedan but is now more like a dune buggy, and a nearly-stock coupe.

A sense of adventure

We picked the name Der Müllwagen for our ML320 because it means "Garbage Truck" in German. That was not a reflection on the condition of our vehicle, but rather a statement of purpose. The Gambler 500 is far more than an excuse for a weekend-long party with outrageous cars, it's a massive cleanup effort oriented towards getting illegally-dumped trash off of public wilderness lands.

This year, the Gambler was centered around Redmond, Oregon, and our mission was to clean up the Crooked River National Grasslands, a USDA Forest Service preserve used primarily to graze cattle and provide recreation opportunities in central Oregon's high desert. Unfortunately, the vast grasslands area is also used as a dumping ground for garbage, vehicles, appliances, and furniture, spoiling one of Oregon's most beautiful landscapes.

On the weekend of the Gambler, the region was experiencing an unusual rainstorm, which lasted throughout the event. This turned the volcanic dirt roads into the Grasslands into slick, muddy streams. However, we were well-prepared with all-terrain tires and the full-time four-wheel drive that was stock on all ML-Class SUVs. On top of that, the ML320 includes stability control, which really came in handy climbing wet hills.

The uneven and slippery road surface tried to get us turned around and stuck, but apart from splashing muddy water all over everything, we traversed many miles of unpaved roads with almost no drama at all. With its body-on-frame design and rugged 4X4 system, the ML320 was among the more capable off-road vehicles at the event. The 3.2-liter V6 engine was more than adequate to the task, and the five-speed automatic transmission and Dana transfer case both operated flawlessly.

A sense of stewardship

Prior to each Gambler event, organizers scout the area and note the locations of the worst dump sites. These are published as a series of GPS navigation waypoints for Gamblers to visit and help clean up. However, Gamblers are encouraged to log any trash dumps they find, using a smartphone app named "Sons of Smokey" after the Forest Service's eponymous bear. Logging a dump site lets anyone using the app know where there's some cleanup work to be done.

When we got out into the wilderness, we were making for the nearest waypoint when we encountered a local out with his dog. He told us of a little-known dump close by, and we drove up a nearby hill to find it. When we got there, we found a terrible mess, strewn with old tires and bags of household garbage. We filled the back of Der Müllwagen and logged the location with the Smokey app, then drove to one of several designated sites to deliver our load for proper disposal.

Next we visited a different waypoint and assisted several other Gamblers in cleaning up that location, then returned to the site we found. When we got there, we discovered that some fellow Gamblers had noted our site report and hauled away most of the rest of the garbage. We filled the SUV up again with the last of the trash and tires and headed back into Gamblertown.

The organizers of the Gambler 500 had arranged for a row of dumpsters to handle up to 300 cubic yards of trash at Gamblertown, but by the end of the first day, they were completely full. On the spot, the organizers designated part of the large gravel field as a place to put all the excess trash.

A seemingly endless stream of cars, trucks, and SUVs, some with trailers attached, came in and out of Gamblertown all day Saturday, adding to the pile. By the time evening rolled around, there were well over a dozen junk cars, boats, and RVs removed from the grasslands, along with furniture, appliances, and just plain trash. The official amount hasn't been announced yet, but Gamblers removed well over 1,000 cubic yards of debris that was formerly polluting the wilderness.

If the Gambler sounds like fun to you, but Oregon seems like a long way to travel, don't be discouraged. The organizers encourage people all over the country to create their own Gambler events, so long as participation is free and stewardship of public lands remains the focus of the event. There are many Gambler 500 events held each year across the United States as well as in Canada and Mexico, all dedicated to the idea that we can make a difference, and have fun in the process.

That's the real heart of the Gambler 500. The event could be measured in cubic yards of junk, but really it's about hundreds of people – in the most dilapidated, unlikely, and hilarious vehicles – taking it upon themselves to clean up our public lands and to enjoy  a huge party while doing so. We were proud to represent MBCA and The Star in this effort. Our sturdy little Mercedes-Benz went everywhere we asked it to go, and survived the off-road adventure to bring us safely home again. 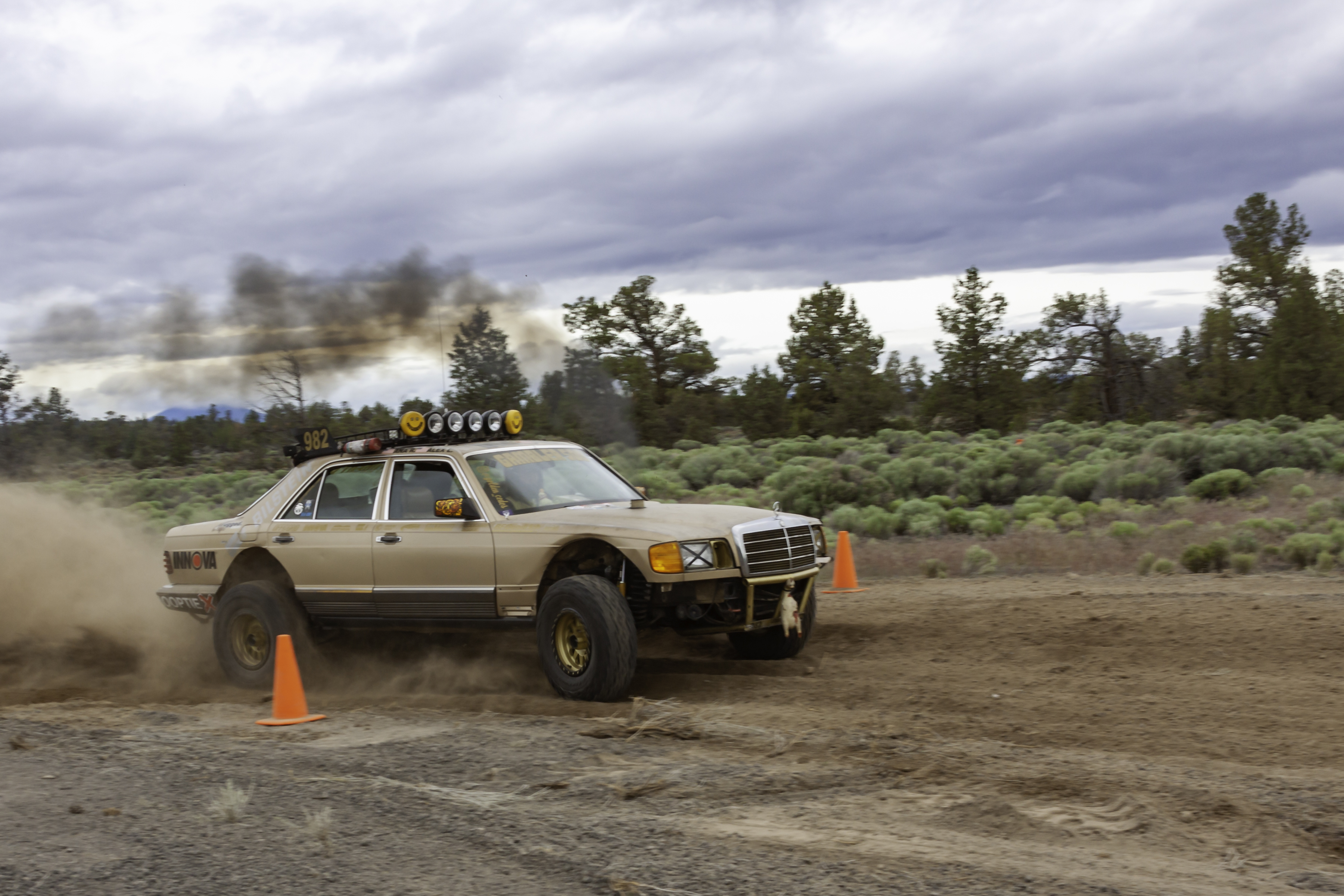